I have a 3DS Test Unit, which is capable of installing 3DS/DSi applications compiled in the .cia format from an SD card. So while a way to install applications you create yourself, for normal 3DSs is not possible (i.e. homebrew for 3DS is not yet possible), I am willing to test them for you. If you do make any applications you want me to test, send them in an email with a description of what the application is suppose to do and any instructions. And if you want I can send screenshots and feedback (as detailed as I can) I make about the applications you or others may send. You can send them to "devguy@hotmail.com.au". 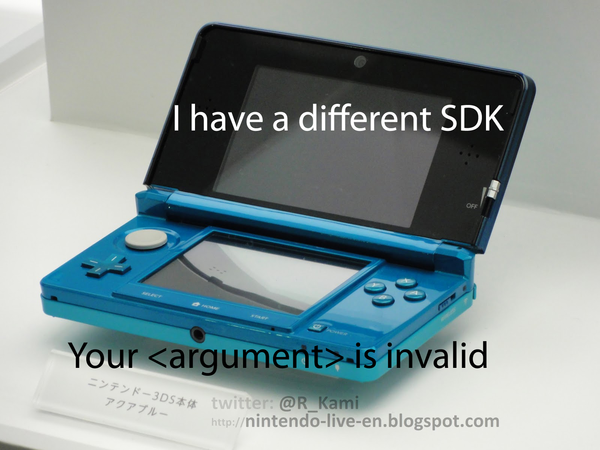 Do you mean one, that someone has sent me? As I do not have any of my own. By the way I will only post links to .cia files if the sender gives me permission.(I have sent an email asking for permission about 5 minutes ago, so I will or will not give a link depending on their response)--3dsguy 14:21, 1 November 2011 (CET)

I do not know a way of creating .CIA files. its just that Jl12 asked me as part of a set of questions on my talk page:

I said of course, and gave some details. Then, to my surprise, someone responded to that yesterday, emailing me 3 apps to test. This person on the other hand does know how to compile apps in the .cia format and appeared to have access to the DSi SDK from what i gathered from the email. I can tell you that they did not work once installed from the .cia file, but they did install which I was impressed about. But like I said before I'm waiting on a reply on whether I can distribute the .cia files he/she sent me.--3dsguy 22:37, 1 November 2011 (CET)

This is the problem many people seem to have with the test units. From what I can tell, the only way to actually run some unsigned application (not created by Nintendo) is by programming it on a development flashcard. --Neimod 01:11, 2 November 2011 (CET)
I'm not sure why you deleted your previous post, but I agree that there are supposed to be different kinds of media (development flashcard, and copying from SD card to internal NAND) that allow running applications on a test unit. However, of these methods, only so far the development flashcard has proven to work with unsigned code. The problem lies in the fact that the unsigned development CXI image uses a dummy RSA private key to create the RSA signature, while official Nintendo development CXI images use the real deal. So as it stands, no developer can create proper CXI images for CIA importing. --Neimod 14:11, 2 November 2011 (CET)

Interesting. That's the first I hear about running self compiled CIA's on a test unit. And yes, sorry I said unsigned application, but I meant signed with the development RSA private key provided by the SDK. The official Nintendo development CIA's do not use keys from the SDK, but rather, a private one that is not distributed. --Neimod 02:17, 4 November 2011 (CET)

I had a look at your previous post, 3dsguy, where you have posted a download link for a CIA file. We don't know much about CIA files so it was interesting to see a file and look into it. The actual data for the app/tmd/cmd files seems to be encrypted (expected that) there's only some plain text like "Root"", "CA00000004" and "Root-CA00000004" to name a few (...) which obviously are paths on the NAND FS. However, I've found out that the name of the files/directories (eg name of the app file:"ad7e6744") which are saved on the SD card after installing the archieve seem to be in the CIA file: Not as plain text, they're actually hex values. I'm not really sure about that. It would be nice if you could post another CIA file, 3dsguy, that we can compare them and find out more about it. Shall we actually create a new page about CIA files?--Lazymarek9614 21:48, 2 November 2011 (CET)

They're certificates.
It's mentioned partially under "Download Play", because it's another use of the same file format. Jl12

Yes I think we should create another page made for .CIA file and move some of this page to its discussion page. But I've got another .cia file and and boots. see [[1]] for everything you may want to know about it and perhaps from this we can start a new page.--3dsguy 07:52, 3 November 2011 (CET)

I think this is more about getting our own code running on the 3DS/CTR then it is about CIA. Jl12

@3dsguy - if the situation changes about being able to get any other test-units please let me know, thanks. Jl12

@Jl12: Do you have the Nintendo SDK? If so, can you upload it (correct me if this is a crime)?

Just a simple question, 3dsguy. In the CIA page you uploaded a CIA example. Can you upload also the binary format uncrypted,please?--Jocopoco 07:42, 18 November 2011 (CET)

That .app CXI is encrypted the same way as titles downloaded via eShop stored on SD card for retail 3DS,(besides different keys) the sample.cia is cleartext. --Yellows8 20:37, 18 November 2011 (CET)