Difference between revisions of "Bootloader"

The bootloader is the binary code stored in the ARM9 and ARM11 boot ROMs and hence is ran when the 3DS is powered on. Its purpose is initializing hardware and loading the system firmware from the internal NAND memory..

Besides NATIVE_FIRM, the bootloader is also capable of booting other firmwares (such as TWL_FIRM and AGB_FIRM). However, this will result either in a Japanese error screen or a system shutdown, directly after FIRM Launching.

Boot9 is not hardcoded to only handle 2 FIRM partitions: it parses all 8 NCSD partitions for this. Boot9 will attempt to use every partition listed in the NCSD which is an actual FIRM partition, in the same order listed in the NCSD, until booting one of them succeeds. Among the not-yet-processed partitions, the FIRM which has the highest value at u32 firmhdr+4 will have a FIRM-boot attempted first. Since that value is normally 0x0, the order of FIRM-partition processing is normally identical to the order of the NCSD partitions.

Boot9 can also boot from non-NAND. For this, a different set of RSA pubks are used(separate pubks for retail/devunit like NAND). The spiflash FIRM image for this is also encrypted with AES-CBC using a normal key stored in prot_boot9(separate for retail/devunit). This encryption is basically used instead of what is used for NAND-firm-partitions. This encryption is only used for the FIRM sections, the FIRM header is used raw. The AES keyslot for this is only overwritten afterwards when booting from non-NAND fails. AES keyslot 0x3F is used for this.

Boot9 has code implemented for using SD(HC) cards, but the input deviceids used by boot9 for those functions are hard-coded for NAND. However, it is possible to use an SD(HC) card in place of the NAND if the NAND chip is first disconnected, and an SD card connected to the bus. Due to the CID being different, partitions will need to be re-encrypted and TWL mode will not work, due to the MBR being in the NCSD header. Using sighax, it may be possible to replace the NCSD header. 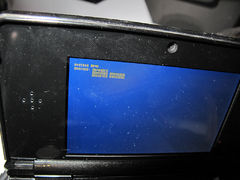